Oasis of tranquillity and relaxation on “Academic Square”

Björnson Gardens (Björnsonův sad) forms part of the area bounded by the streets Veveří, Zahradníkova, Kounicova and Šumavská. Being overlooked by three different universities, it has been christened “Academic Square”. Construction of this genteel quarter proceeded at the end of the 19th and beginning of the 20th centuries on a strip of pasture stretching along Veveří Street as far as Žabovřesky.

First to be erected were buildings of the Czech Technical University (today’s Faculty of Civil Engineering, Brno University of Technology), which were used as a military infirmary during World War I, accompanied by wooden hospital buildings erected on the open grazing land that lay before it. These huts were torn down after the war and until 1945 the land was given over to productive horticulture (i.e. market gardening with some smaller vegetable allotments). The area was repurposed mid-century as a park, by which time it was already surrounded by the buildings of the polyclinic, Masaryk University’s Law Faculty, and the building of today’s University of Defence, known as the “Bread Roll”.

Since 1993, these gardens, laid out in the 1950s, have borne the name of Norwegian author and playwright Björnstjern Björnson, who was a great admirer of the Czech people, and in whose memory a plaque has been mounted on an erratic boulder, standing at the park entrance on Zahradníkova Street. The park acquired its current form in 2014 thanks to reconstruction supervised by Zdeněk Sendler, from the landscapers Ateliér zahradní a krajinářské architektury.

The park has become an oasis of tranquillity and relaxation, where parents and children, local residents and students all mingle together. Björnson Gardens have a children’s playground, outdoor gym, and the “Piknik box” café; the park also has public toilets. 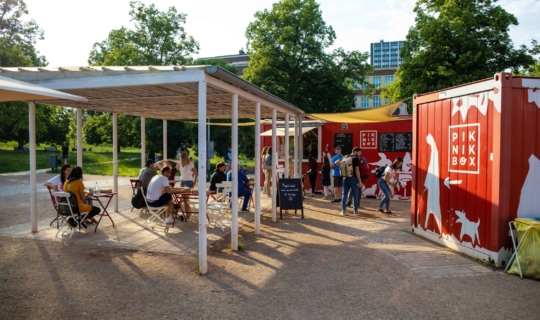 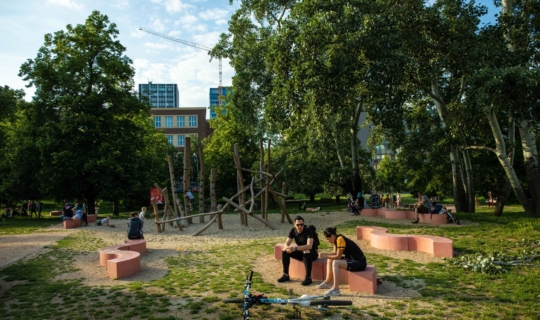 Tell your friends about Björnson Gardens!

Upcoming events in the Björnson Gardens