The famous composer Leoš Janáček is one of the most significant people in the history of Brno. You can take a walk through the places related to his life.

Leoš Janáček was born on 3 July 1854 in Hukvaldy in north-east Moravia as the ninth of thirteen children. When he was 11 years old, his father sent him to the Abbey of St Thomas in Brno to study music. He went on to graduate from a secondary school and a teachers’ institute in Brno before leaving for Prague to study at an organ school. He studied music in Leipzig and Vienna. Back in Brno, he entered local social and cultural life. He founded an organ school which became a conservatory after the establishment of Czechoslovakia, conducted orchestras, wrote music reviews, taught music, and, above all, composed. Among his most famous operas are Její pastorkyňa (Jenůfa), Příhody lišky Bystroušky (The Cunning Little Vixen), Káťa Kabanová, Věc Makropulos (The Makropulos Affair), and Z mrtvého domu (From the House of the Dead). He is also renowned for his orchestral compositions, especially Sinfonietta, Glagolská mše (The Glagolitic Mass), and Taras Bulba, an orchestral rhapsody. Most of these works premiered in Brno, where Janáček spent most of his life. Leoš Janáček died in 1928 in Ostrava.

Some major institutions in Brno have been named after Janáček, such as Janáčkova akademie múzických umění (the Janáček Academy of Music and Performing Arts) and Janáčkovo divadlo (the Janáček Theatre). Far beyond Brno, there is even a crater on Mercury named after this famous composer.

The Tourist Information Centre of Brno has been working on a project named ‘Janáčkovo Brno’ (Janáček’s Brno), which will include activities to bring life to public spaces in the city and to raise broader awareness of Janáček as a globally renowned composer. Also you can find information panels indicating the buildings and locations connected to the life and work of Leoš Janáček in Brno. You can also set out with In the Footsteps of Leoš Janáček in printed form, you can find more information and illustrated material on the trail here. Visit www.leosjanacek.eu to find out more about the life and work of Leoš Janáček. Watch the animated video and play an online musical memory game. 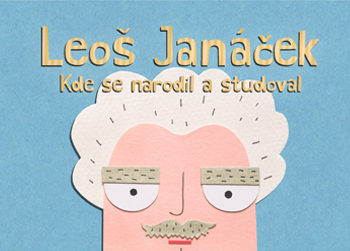 Tell your friends about Janáček’s Brno!

Explore Brno with a local guide