Zuzana Fuksová: Prague Is Not Brno

Prague is not Brno, nor the other way around. Economic migrants flee Brno for Prague not in boats but on a yellow bus. Most of them arrive only with ideas of a city full of art exhibition previews and economic opportunities; a place where the Blade movie was shot and where you die by falling off the Charles Bridge, not in a hospital.

You can define Brno also by what it’s not, comparing it with Prague. The first contact with Prague was sweet, at least for me; unlike in Brno, it’s where I found the glorified farmers markets and bought coriander somewhere else than in Makro. At the same time, so many stunning events and artsy things were happening there. Just like with everything, I sobered up with time: the farmers markets are just better-looking versions of Brno’s Zelňák (Vegetable Market), only there they call the purple salad radicchio. 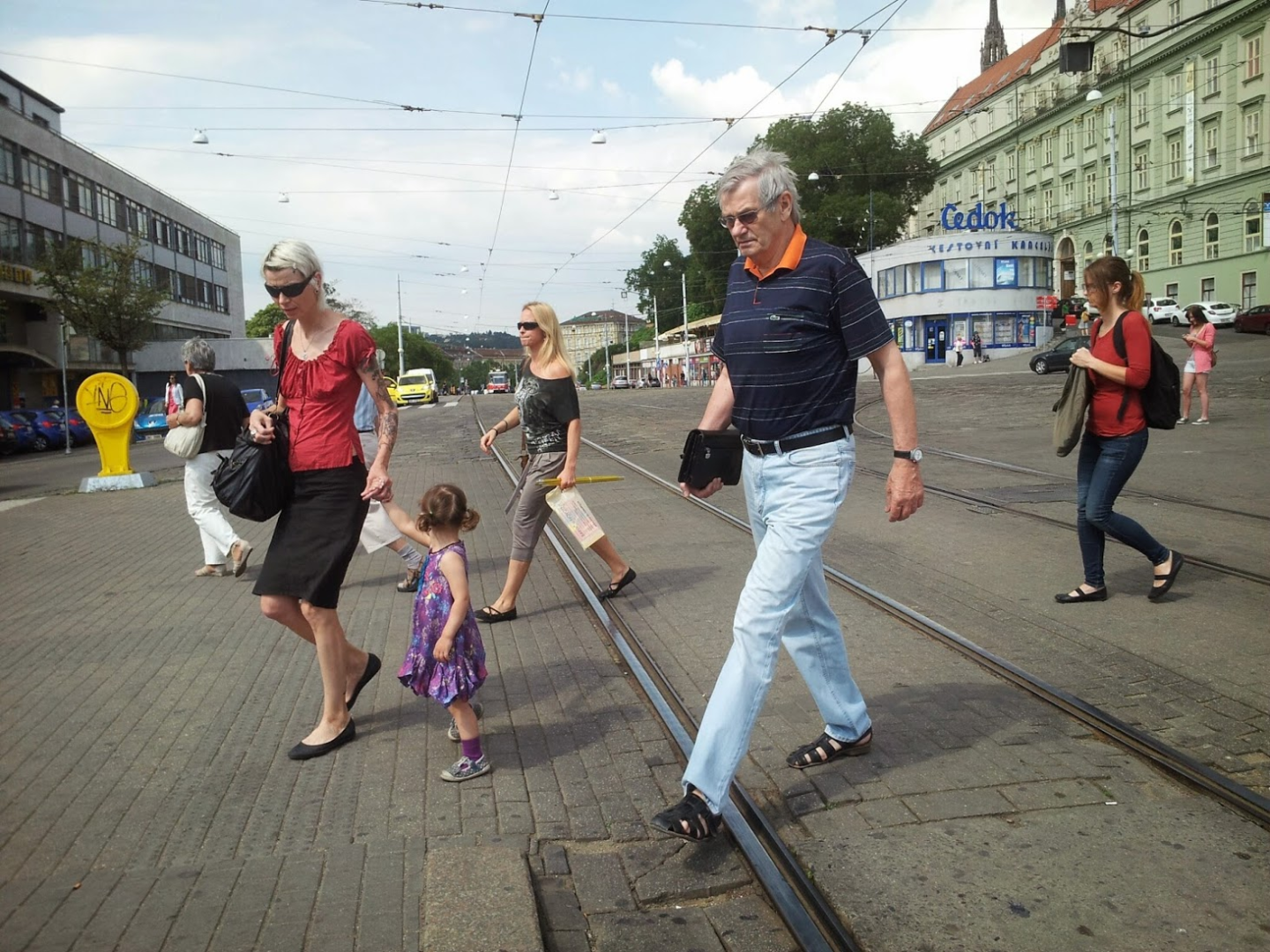 In those five years I spent in Prague, outside my hometown, which the former mayor Onderka considers a region, not just a city, coriander made it to more sophisticated shops in the centre of Brno. In Brno, there’s just about the right number of cultural events, so you don’t to worry about missing many of them. In Prague marketing agencies, Brno is devoutly called an exotic place which is authentic and where people have a special kind of fun, and they’ll tell you that while mimicking the accent they’ve heard in the famous movie The Inheritance, based in an area near Brno. 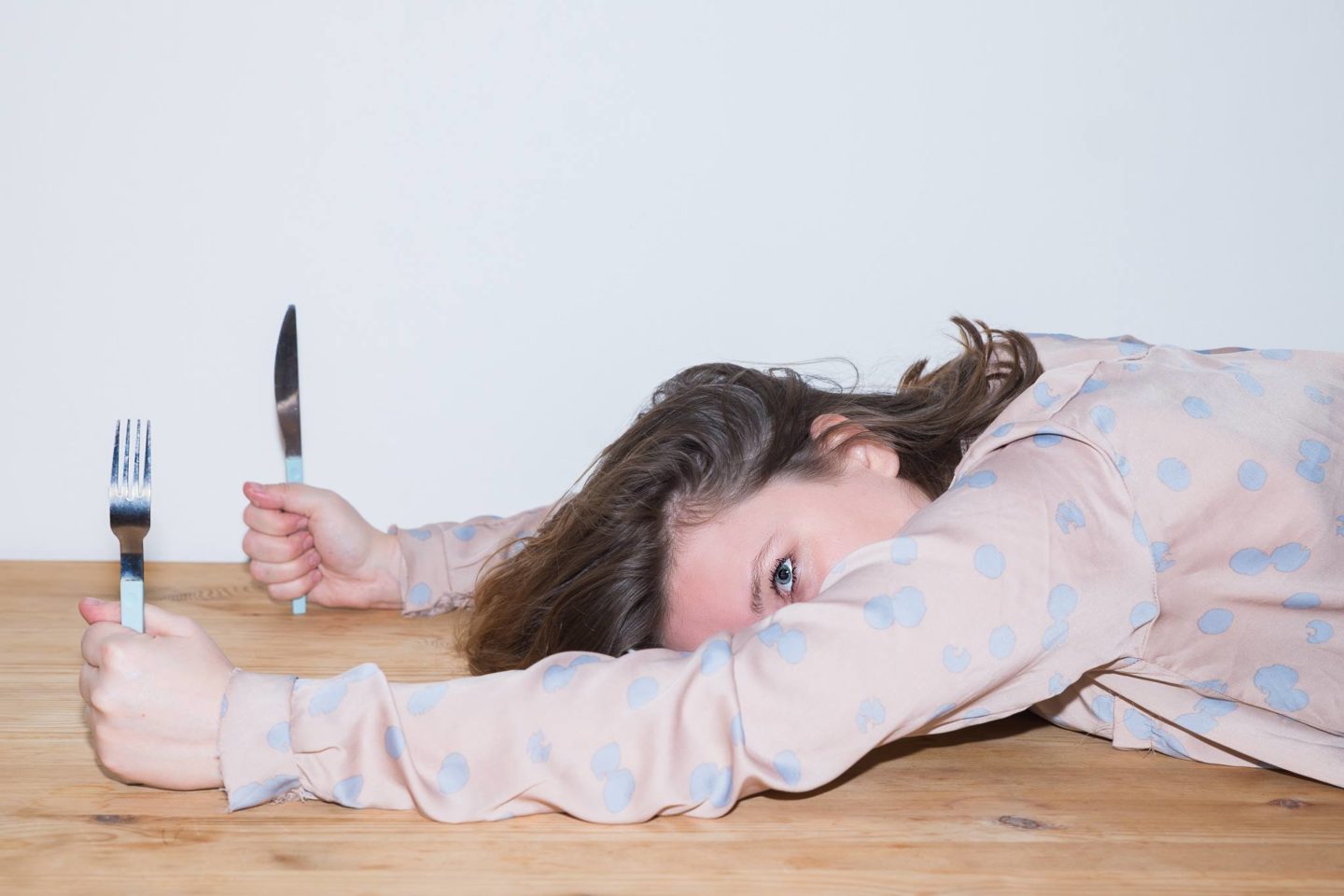 This City Is not for Egomaniacs

Brno is the city for those who no longer have any big, noble ideas of what they’ll manage and achieve in their lives. Brno, a mediocre city in the best possible sense, is just the right size. If it were a human being, it wouldn’t be trying to get into any sophisticated, fine-dining restaurant but would be satisfied with a plate of spaghetti in a university canteen instead.

In recent years, I’ve been watching Brno more like a euphoric tourist: I appreciate its controversial statues, cafés you can all easily visit on foot in a single hour, even limping and not exactly in a hurry. Sure, I may be idealizing Brno, as I come here only from time to time, but the locals always seem to be friendlier and more communicative, even if not as much as in the Balkans (only rarely does it result in a shooting here). The people of Brno are a comical answer to the people of Prague, who also call them Czech Germans. 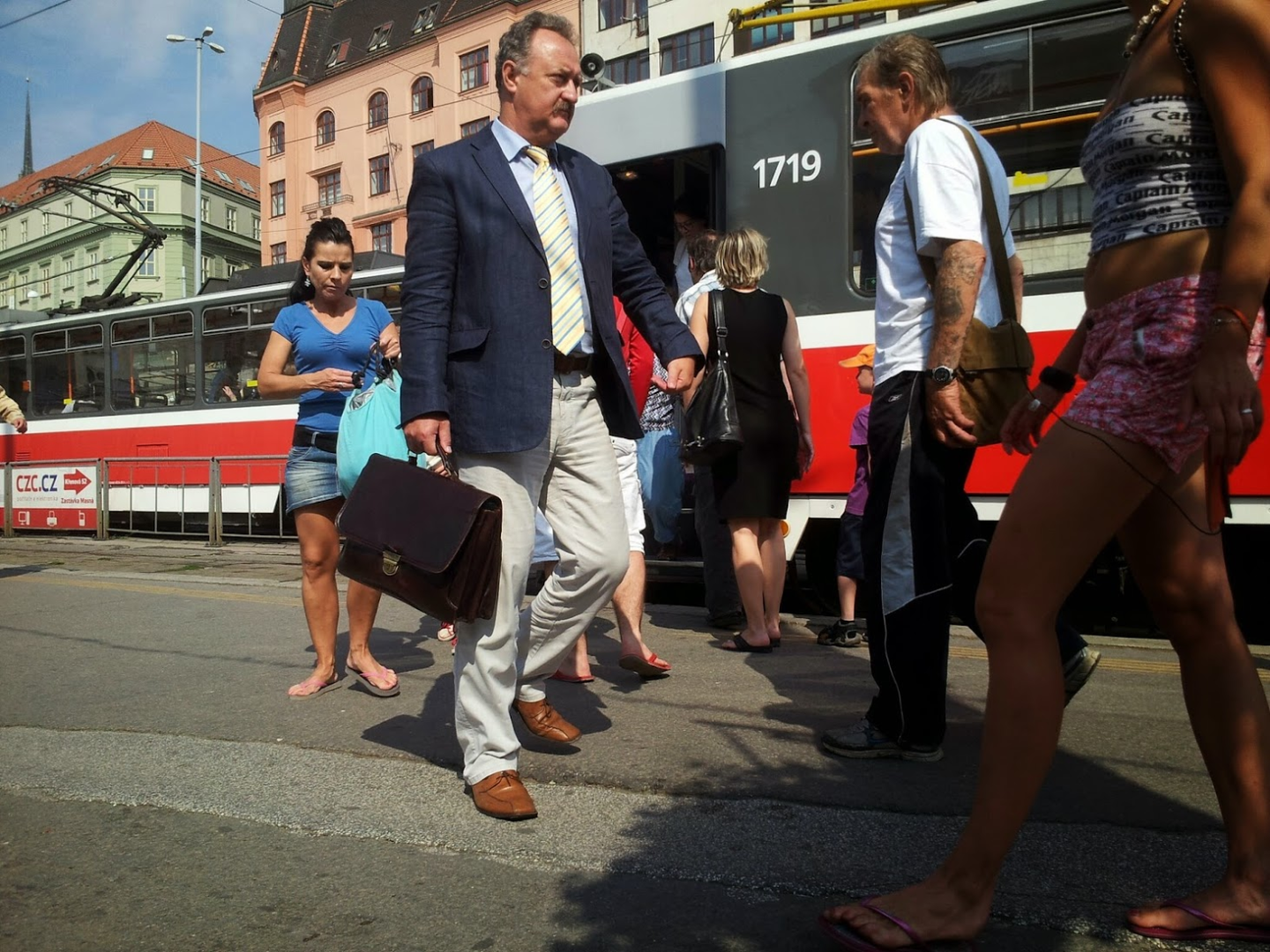 What you learn in Brno will be useless elsewhere

You can absorb the spirit of Brno so much that you get local distances under your skin; you’d know that a fifteen-minute walk (maybe less) will get you just anywhere. With this biorhythm deep under your skin, you are just bound to fail when trying to walk somewhere from Můstek in Prague. In Brno, knowing everybody, even if you don’t really want to, is both pleasant and annoying. Gossiping is just omnipresent. It’s a bit like among the gangsters in The Wire series: it’s quite easy to learn details from the lives of those around you before they even happen. In this respect, Prague is a bit of relief; full of people, most looking less involved and colder. Maybe these people are like that because they are used to facing various traps and thieves on the city’s cold subway.

The Duplicate of Brno

Perhaps only the Prague municipality of Letná reminds of the centre of Brno, both in size and structure: a dense concentration of service providers and even old-school confectioner’s and clothes repair shops whose owners may feel they’ll vanish together with them. Letná is filled with a warming temperament of the real as well as so called migrants, such as Vietnamese shop owners whose kids – unlike ours – will finish their studies at the Faculty of Economy, and graduates of art schools from Moravia. 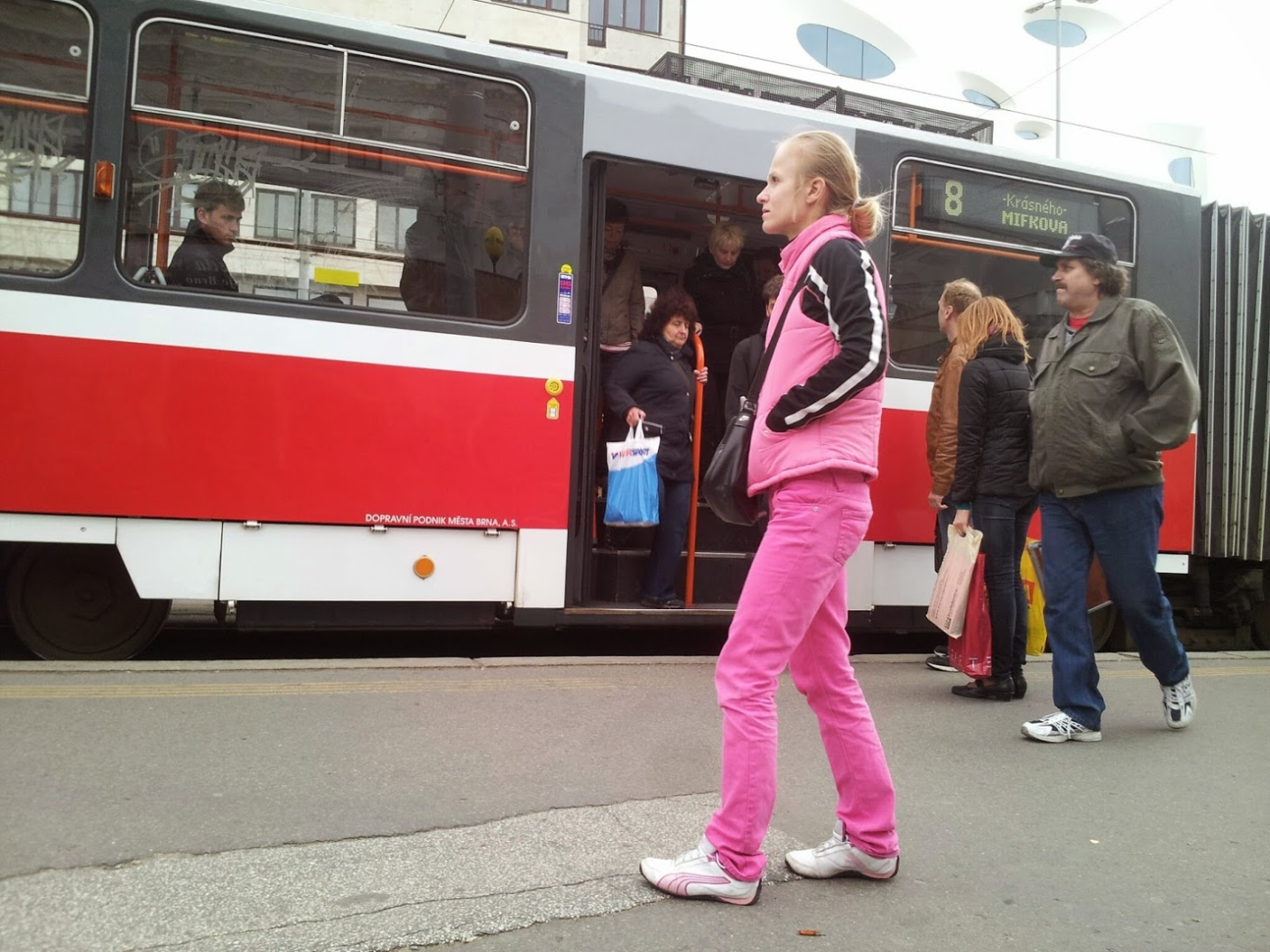 Waiting for the “šalina” (“tram”, in the local dialect) Photo Standa Biler

The latter ones invest over a half of their income, mostly hard-earned in corporations, to be close to “the Opportunities”, all while wearing white sneakers and a hat in any weather (as well as in a heated room) and having a soy latte and an avocado sandwich. The reverse migrants, who return to Brno ina sort of crabwalk, have brought these delicacies to Brno as well; upon entering middle age, you find out that instead of a radicchio for 80 CZK you can buy two, maybe even three heads of lettuce at the Vegetable Market in Brno, and instead of overpriced rent at Letná you can get a mortgage for an apartment in Boskovice, where even your therapist lives (that’s how cool it is!), and you can do your alienated job there as well. So why move? As MGMT sing it – it’s time to pretend! But what they don’t sing about is that even such times must one day come to an end.

Graduated from the University of Life at Masaryk University. One half of the most successful Brno band, Čoko Voko. Host of the Buchty (Chicks) program, broadcast by Radio Wave where she’s also a commentator in Prolomit vlny (Breaking the Waves). Spent some time in Prague where she opened a café for the people from Brno living there, only to eventually settle in the Brno municipality of Obřany which she’s been working systematically to elevate and turn into a hip neighbourhood.

Zuzana Fuksová is not giving it up with Brno

Blood Is Thicker Than Water – Gotta Get Back!

During those long years in exile, a good citizen of Brno starts to see their hometown through rose-coloured glasses, which in my case is always undone the moment I arrive at Brno’s main station, which looks like a lot like Timisoara in Romania. All you need to do then is unpack and call your friends. The return of the prodigal citizen. Because over here someone always knows someone who’s just got a divorce and is trying to rent out their apartment. For me, Brno is mainly a city with simple logistics and rich social capital. A place where – with a little bit of luck (i.e. fading ambitions – so what?) – you always have some time left (thank God!) for aimless wandering, some slandering and maybe to create some humour, which is why everybody keeps asking what put in the food in Brno.