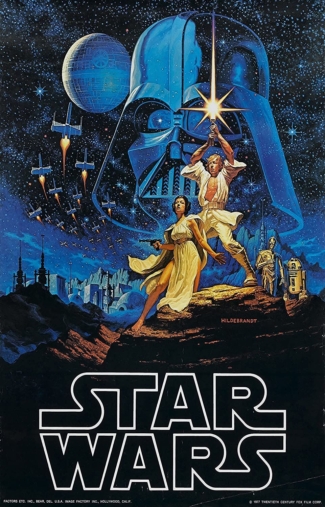 Dust of that lightsaber, feed your Ewok and set off to Tesco’s! To see the marathon screening of episodes IV, V, and VI of Star Wars! This atmospheric pop up in the possibly hidden space of the Tesco’s storage with a view of the city of Brno organised by Kino Art! Bar and food by Mooi will be included. You can also look forward to a welcome drink and also a surprise.

Details about the agenda coming soon.

The screening will take place at Tesco’s on Dornych 4 (former supermarket Prior) on the 3rd floor. You’ll get there by taking the escalators in the building, you just need to ride up to the top floor.

Luke Skywalker stays with his aunt and uncle on a farm on Tatooine. He is desperate to get off this planet and get to the Academy like his friends, but his uncle needs him for the next harvest. Meanwhile, an evil emperor has taken over the galaxy, and has constructed a formidable “Death Star” capable of destroying whole planets. Princess Leia, a leader in the resistance movement, acquires plans of the Death Star, places them in R2-D2, a droid, and sends him off to find Obi-wan Kenobi. Before he finds him, R2-D2 ends up on the Skywalkers’ farm with his friend C-3PO. R2-D2 then wanders into the desert, and when Luke follows, they eventually come across Obi-wan. Will Luke, Obi-wan, and the two droids be able to destroy the Death Star, or will the Emperor rule forever?

The story of Luke Skywalker, Han Solo, Princess Leia, and the others did not end with the destruction of the Death Star, it continues in this movie. Imperial forces have since driven the Rebels to hide on the ice world of Hoth. But even on such an icy, backwater world, they cannot escape the evil Darth Vader’s eyes for long, and he devastates the Rebel base in an assault with the Imperial AT-AT walkers. Luke flees to Dagobah to begin Jedi training with Master Yoda, while Han Solo, Chewbacca, Princess Leia, and C-3PO run the blockade of Imperial Star Destroyers in the Millennium Falcon. The Imperials pursue them across the galaxy and eventually catch up with them on Bespin. Now Darth Vader plans to use them as bait to lure Luke Skywalker to him, and turns Han Solo over to Boba Fett as a prize to be delivered to crime lord Jabba the Hutt. Luke learns a terrible family secret after losing a swordfight with the Dark Lord. Will he, and the others, escape the Empire’s clutches?

Light-sabers sparkle, the Millennium Falcon flashes through hyperspace, and creatures from all over the galaxy defy the Galactic Empire, in this stunning third chapter of the “Star Wars” saga. As the Rebels prepare to attack Emperor Palpatine’s awesome new Death Star, Han Solo remains imprisoned by the loathsome outlaw Jabba the Hutt, who has also captured Princess Leia. Luke Skywalker rescues his friends, but he will not be a true Jedi Knight until he confronts Darth Vader again, who has sworn to win him over to the Dark Side of the Force. With old favorites like Chewbacca, Yoda, R2-D2, C-3PO, and Lando Calrissian, plus the small, but stalwart Ewoks.