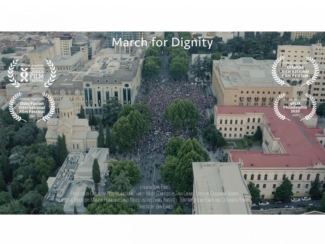 Will the Georgian capital see its first ever march for LGBTQI+ rights? The answer is this documentary drama about the local queer movement’s attempt to organise Tbilisi Pride.

Hostility towards LGBTQI+ topics has a long history in Georgia, and the idea of holding a Tbilisi Pride makes the tension worse. Some Pride organisers still recall the trauma from the first attempt in 2013 – but the need to be seen, heard and respected is stronger than fear. The queer community are opposed by the extreme right, the government and the Orthodox Church, who are upset by as little as a drone with a rainbow flag flying over their heads. The filmmakers present voices from both sides of the barricade, showing an image of present-day Georgia, which is culturally caught between Russia and the EU. Many LGBTQI+ people are leaving Georgia, but Mariam Kvaratskhelia, a Tbilisi Pride organiser, clearly says, “I still have some work to do here.”