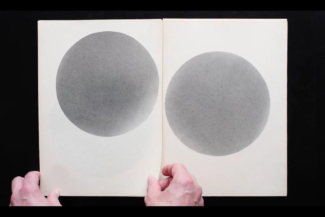 The exhibition of Jaromír Novotný Other Things Held Constant presents a collection of new creations by the artist in the abstract monochrome domain. The works – mainly paintings, but also photograms, plaster-of Paris pieces and two videos from the last year – were conceived with regard to the arrangement of the spaces in the Brno House of Arts. They can be viewed both independently and within the framework of their relationships, contexts and installation design as a single whole in terms of composition and meaning. Each of the five exhibition rooms provides space for developing one chosen theme, whereby the link common to all represents subtle changes against the background of something deliberately invariable. Repeating a particular approach, slight shifts in the relationship between two elements in a painting, inevitability of their position, moving only within a limited range, creates imperceptible variations in the paintings or works in the individual rooms. More significant differences can be spotted only after moving between the rooms, but at the same time we perceive a link with the central theme that the works always return to, albeit in different ways. A parallel to the subject matter developed by the exhibition is a method used in mathematics, economics and other social sciences called ceteris paribus (lat. for all other things being equal), to which the exhibition title refers. It examines the impact of a single variable on the result, assuming that the other variables remain unchanged.