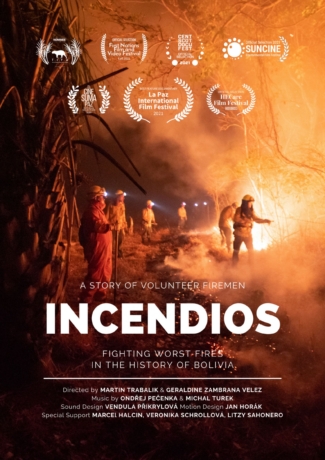 As destructive fires rage in Bolivia, a group of volunteer firemen are doing all they can to keep them in check. They are not facing just a natural disaster, though: unscrupulous deforestation is an even bigger enemy.

Burning undergrowth has been a part of human farming methods since time immemorial, but above the burning forests of South America, the economic interests of several influential individuals are intertwined with environmental and climate impacts and the suffering of the local population. The fragile landscape, already afflicted by climate change, is disappearing at a staggering rate. In Bolivia, undergrowth burning is a still legal and insufficiently regulated practice. Czech documentarist Martin Trabalík set out with Bolivian director Geraldine Zambrana Velez to the front lines among the volunteer firemen who are becoming the pleading spokespersons against the global crisis.