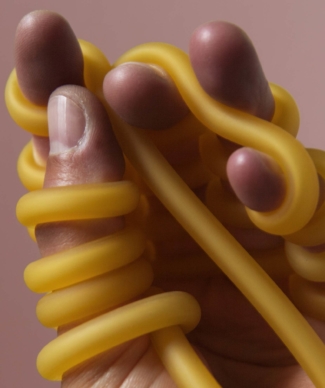 A somatic exhibition was called a wonderworld in our jargon. It took place at the break of time and space, it was embedded in and at the same time separate from the world of time, space, sense and meaning. The entrance to the exhibition was a ritualized transit between the world and the wonderworld, between two different dimensions of the same reality. Pilgrims would be yanked from their everyday lives and hurled into the sacred space-time continuum, where their flabbergasted bodymind would be subjected to experiences unheard off on the outside. Wonderworld consumed them and affected them on various levels at the same time – on the cognitive, emotional, sensory and cellular level. The overall experience was formed by the permeability of the bodymind just as by the feng shui of the environment – the color of the light, direction of gravity, temperature of sound, taste of the walls, elasticity of the floor, electromagnetic waves, flexibility of the climate.

It all awakened proprioceptive bodily reactions in the Pilgrims through which they realized their presence in the present and immersed themselves in the hidden layers of space-time reality. They ceased to be Spectators who observe the reality and became Participants who take part in it and create it. A moment of spiritual assumption was brought upon by the experience of complete bodily immersion.

In fact, people would visit exhibitions so they could come back from them. The first moments after coming back from wonderworld with new, freshly hatched out eyes were crucial for the holistic experience. The dislocated sensory apparatus revealed a reality free of pareidolic bad habits and apophenic wishful thinking – the way it really is. A long lost custom was to place a mirror or a bowl of water at the gallery exit to enhance the experience and intensify the triggered reaction.

At the peak of its popularity, when the connection to the Pole was strongest, experiences in wonderworld would arouse dramatic reactions – after returning from the exhibitions visitors would strip naked, tear out their identity microchips, assume a new name and sign proclamations of faith. Recruiters, sect members and notaries would wait in front of the gallery to take advantage of their momentary awakening and determination to make great changes in their lives. It had to be done quickly because the acute broadening of perception was short lived and the bodymind was in a hurry to get back to the well-known comfort of its old habits.