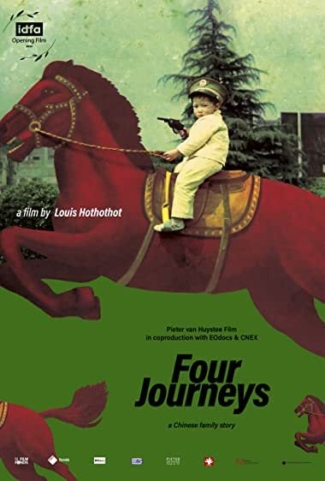 As the second-born child during the Chinese one-child policy, director Louis Hothothot was illegal for a while. In his film Four Journeys the Chinese-Dutch filmer exposes family traumas by going back to China and interviewing his parents and his sister. A painful history of Mao’s China.

Louis Hothothot’s birth ruined both his parents’ lives. Or at least that is how he sees his “guilt” at his darkest moments. He was an illegal child – a second baby at a time when China strictly enforced the one-child policy. His father was severely fined and lost all chances of career growth. His mother, aged 22, was forced to undergo sterilisation. When Louis turned 20, his feelings of guilt forced him to leave the country and limit contact with his family to a minimum. Years later, the director returns home and through an intimate monologue as well as open dialogues reflects on the history of his family and native land. At the same time, the film is a universal story of old grievances and a search for family reconciliation.