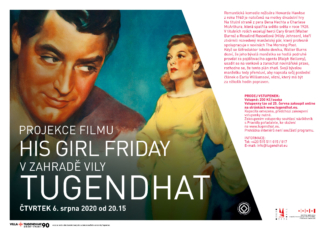 Film screening: His girl Friday in the garden of villa Tugendhat

Howard Hawks’ 1940 romantic comedy is based on the play “On the Title Page” by Ben Hecht and Charles McArthur, which saw the light of day in 1928.

Actors Cary Grant (Walter Burns) and Rosalind Russell (Hildy Johnson) excel in the title roles, portraying a divorced couple who work together for The Morning Post.

When the editor-in-chief of this newspaper, Walter Burns, learns that his ex-wife is going to marry an insurance agent (Ralph Bellamy) for the second time, settle in the countryside and leave journalism, he decides to thwart the plan. So he persuades his ex-wife to write her last article about Earl Williams, a prisoner who is to be executed in a few hours.