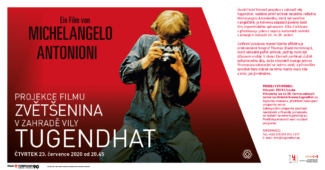 Film screening Blow up in the garden of Villa Tugendhat

The first film by Italian director Michelangelo Antonioni, shot in English, is a film adaptation of a short story “Indian Summer” (Las babas del diablo) by Argentine writer Júlio Cortázar and it is one of the most iconic films and period documents of the 1960s.

The central character of the mystery story is professional photographer Thomas (David Hemmings), who accidentally takes a picture that could be used as evidence of murder. Within this piece that is somewhat difficult to categorize when it comes to genre, the spectator follows the process of Thomas’s alienation from his surroundings and raises a number of questions about the reality around us and how we perceive it.

Unlike the original story which is set in the French metropolis of Paris, Antonioni decided to move the story to London, where he had lived for eight months before filming to capture the avant-garde atmosphere of hippies, pop-art and other diverse parts of the British metropolis of the 1960s. This effort resulted in two Oscar nominations and a Palme d’Or Award at the 1967 Cannes Film Festival.

The film will be screened in its original version with Czech subtitles.
Duration: 111 minutes.