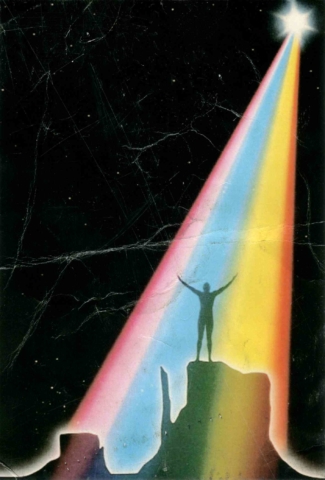 The following exhibition takes us back to the fundamental aspect of the looping nostalgia that fuelled several decades of the last century. The longing for the espace present in the emancipatory movements of the ’60s and ’70s. The recurring promise of the better forever present in the history of the techno-optimistic ’90s. The spectrum of nostalgia for better times inhabited our realm and now takes vengeance on us by adding painfully accurate meaning to the words – we have seen better days.

Browsing through the counterculture inspirations reflecting in Mark’s work makes me feel as if I was a younger cousin sneaking into his room. Instead of posters, a massive sound system and colourful stickers I’m hit by a painful sensation of decay – what happened to this place? Where’s the joy disappeared to and where is the footage from the rave parties? Is this the end? The minimalist and nostalgia-free end. It is where time is looping and the movement of three-bodies over the horizon shifts into chaos that is hard to reckon with until everything melts between your fingers and falls apart. The refreshing cold of the dawn in the summertime festival, the moment when you are not sure which sun just set and which one is about to rise – or maybe we are entering a long cold night.

What happened to the refreshing psychedelic vibes of the ’60s, dosed with free love and dignity born in the nest of human emancipation? Where did the ’70s go – the great renaissance of the new-born world quickly sliding into the trap of melancholic darkness and afterglow paranoia. You are entering the past in the ’80s to find yourself right in the middle of a fucking neoliberal raptor’s zoo – and somebody is giving booze to these goddamn things. Roll the dice, feel the “e” and jump into the last decade of this miserable century where you risk your sanity for the moments of temporary enlightenment.

This journey, like any other, will drive us through the utopic moments ranking from the modernism project through the post-war era and end-of-history ’90s. The search for a common denominator leads us to escapism – the younger brother of a proud Utopia. On the pathway to Forever, you mustn’t forget about the intention of your psychonautic trip – the unrealistic foundation of a better world.

In the eternal loop of the past that resembles a foreign country and the ‘better future’ we have already seen, our task is to look for an escape path. The one that goes beyond the condition of time and space. Allows us to forget about the painfully three dimensional world and slip into the void of 5D infinity – Escape to Forever.