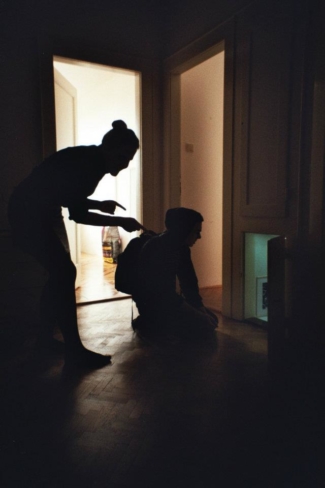 Although it was originally intended to be the third part of a series of exhibitions presenting the phenomenon of Brno´s showcase galleries, due to well-known pandemic reasons, the Jádro Gallery will now be the first space presented in this cycle.

The Jádro started life as a miniature gallery, during the time of it´s realization the artists – then roommates – Katarína Hládeková and Marie Štindlová began their collaboration in 2012. They opened the gallery directly in their own apartment. The way in which the gallery was operated clearly reflected both artists previous experience in managing an independent DIY gallery, as well as the enlightened insight into the normal functioning of the burgeoning showcase trend. Instead of organizing exhibitions of classmates or peers, they decided to dedicate their offspace to established artists, affording them the opportunity to present in new conditions.

Although the duration of the Jádro Gallery was very short (just over a year), a lot of significant events took place around it. After leaving the original apartment, the Jádro Gallery functioned for a while as a travelling gallery under the Expedice Jádro (The Expedition Core), Jádro na návštěvě (The Visiting Core) or the Jádro Fresh Festival (The Core Fresh Festival).

The Jádro enters the next phase with a balanced exhibition at TIC Gallery. At the same time, it defies its own categorization. Is the transfer of the original apartment gallery to the premises of the established exhibition institution an adequate representation of the format? The exhibition opens up questions regarding the contradiction and continuity of private/public space, and of the presence/absence and the audience’s willingness to accept and relate to the immediately absent. Somehow, unintentionally, Jádro Gallery, on its return, is once again working on evaluating the development of the DIY gallery trend, of which it is a part: did it disappear from this genre, during the time when Jádro was absent from the scene for a few years, originally an important aspect of personal encounters and now fully replaced by a presentation designed exclusively for the Internet?