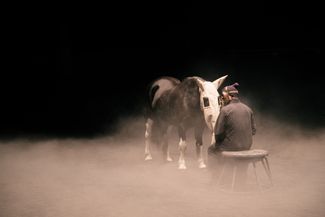 VR Movies – To the Point – Into the Wild

Three movies in virtual reality (VR 360 Cinema) with the common theme of nature.

„2nd Step“ is a photorealistic, „floating“ VR film journey through space in which the viewer joins astronauts on a future mission to prospective destinations on the Moon and Mars. The film conveys an authentic sensation of how it must feel to actually be in space. „2nd Step“ has been produced on behalf of German broadcaster ZDF and with expert advice of the European Space Agency, thus a huge amount of original data was integrated, forming the basis for the photorealistic reconstructions of the settings which are presented in an extraordinary richness of detail and authenticity.

This unforgettable 360-degree experience pushes past traditional documentary tropes to evoke the reality and emotional gravity of life in Fukushima, ten years after the 2011 nuclear disaster. After the Fallout is an immersive mosaic that takes us through surreal environments in the exclusion zone, relives the struggle of the heroes who worked to prevent the meltdown, and explores the lives of families as they navigate a new world which they have had to adapt to.

Within an empty void, horses start to appear. They emerge from darkness, blowing, exhaling. Together, we move through space and time, as the viewer increasingly becomes the horse.