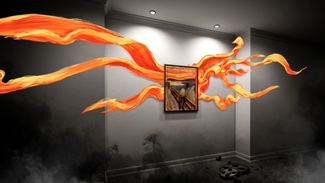 Three movies in virtual reality  (VR 360 Cinema) with the common theme of dreams and horror.

What is behind the cinema screen? It is not surprising that cinema-in-the-cinema scenes are often used in horror films. For they irritate and unsettle by reminding us – the immobile viewers hidden in the cosy darkness – of our own questionable position. What if the forces of unlimited imagination penetrate through the canvas into our reality? What if the auditorium dissolves and with it the familiar laws of cinema itself? In a way never before seen, „tx-reverse“ shows this collision of reality and cinema and draws its viewers into a vortex in which the familiar order of space and time seems to be suspended. Back in the 1990s, Martin Reinhart invented a film technique called „tx-transform“, which exchanges time (t) and space axis (x) in the film. Normally, each individual film frame represents the entire space, but only a brief moment of time (1/24 second). In the case of tx-transformed films, however, the opposite is true: each film frame shows the entire time, but only a tiny part of the space – in cuts along the horizontal spatial axis, the left part of the image thus becomes the „before“, the right part the „after“.

Searching for stability in his life, Peter Thaler sets out on a hike in the Swiss mountains from which he will never return.

Based on the painting, The Scream leads the user into an exploration of the artist’s work and his obsessions. This interactive sensory virtual reality experience unfolds in three chapters, offering a unique interpretation.